The Rocky Mountains is the largest mountain system in North America. It spans several states in the United States, including much of Colorado. The mountain range divides the state between the eastern plains and the Western Slope.

Its eastern edge rises above the High Plains, beginning with the Front Range and rise high above the clouds towards the west. Discover more about the Rocky Mountains in Colorado with our guide below.

Where are the Rocky Mountains? 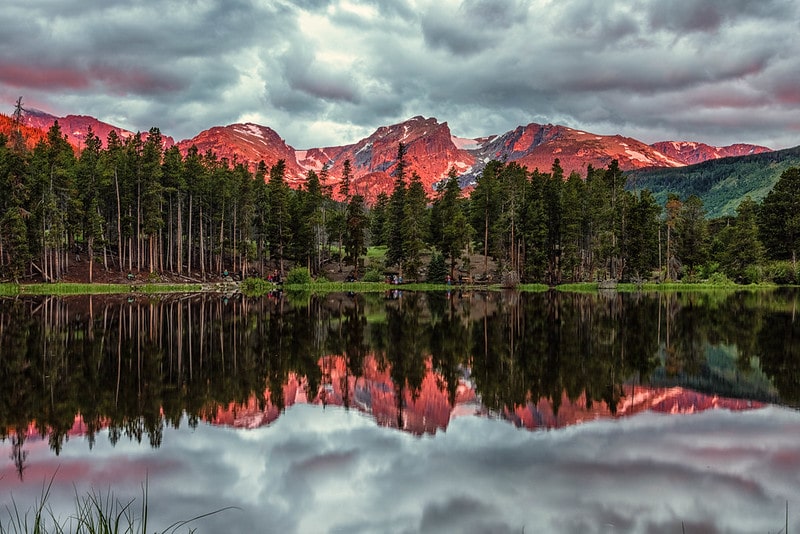 Casually called the Rockies, this major mountain range spans 3,000 miles from western Canada all the way through the U..S. into the states of Montana, Wyoming, Idaho, Colorado, New Mexico, Utah, & Arizona.

Its northern point is located in Canada at the Liard River valley in northern British Columbia, extending to its southern tip at the Albuquerque area adjacent to the Rio Grande Basin.

The Rocky Mountains formed 80 million to 55 million years ago when a number of plates began sliding underneath the larger North American plate. The angle of reduction was somewhat shallow, which resulted in a vast belt of mountains running through western North America. Further tectonic activity and erosion by glaciers eventually sculpted the Rockies into the striking peaks and valleys we have today.

The Rocky Mountains in Colorado 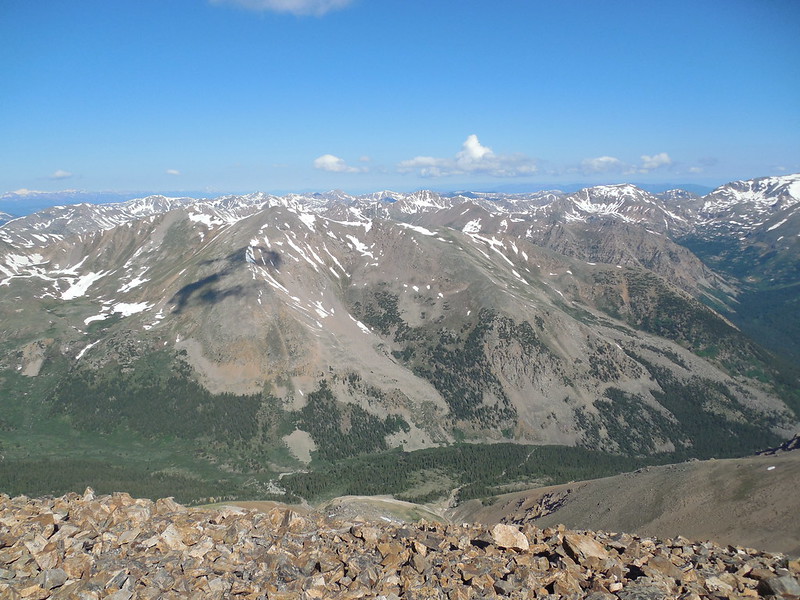 Views from the tallest peak in the Rocky Mountains, Mount Elbert. Photo by Jimmy Emerson.

Of the 100 highest peaks in the Rocky Mountains, 78 (including the 30 highest) are located in Colorado. The highest peak in the range is Mount Elbert in Colorado, rising at 14,440 feet in elevation.

There are eight sub-ranges within the Southern Rockies that make up Colorado’s mountainous landscape. Each is broken down below with highlights of each specific range. 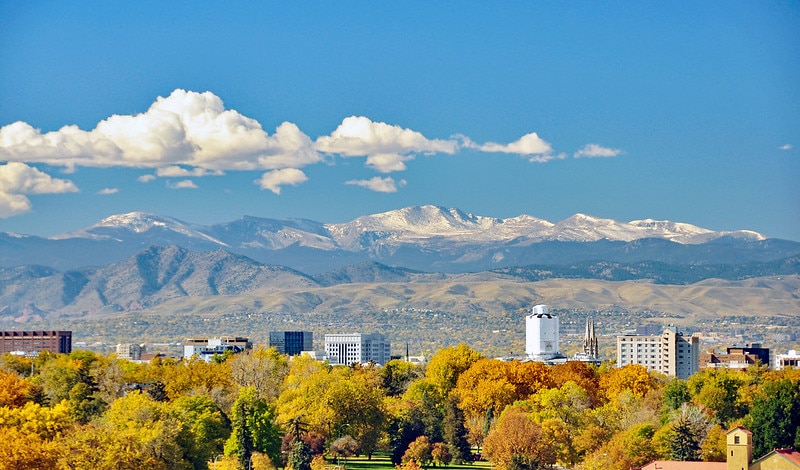 The city of Denver and Front Range in the background. Photo by James St.John.

The Front Range is the longest mountain range in Colorado. It spans roughly 180 miles north to south, from Cheyenne, Wyoming to Pueblo, Colorado. From east to west, the Front Range runs approximately 97 miles across.

Rising 10,000 feet above the High Plains, heading west from the plains, the Front Range will be the first mountain range you will see. Its highest point is Grays Peak at 14,278 feet and is also the highest peak along the Continental Divide.

The Park Range is located in the northwestern part of the Rockies, forming a somewhat isolated part of the Continental Divide. It rises north to south for almost 40 miles from Northern Wyoming to its southern edge near Steamboat Springs.

Because of its steep rise out of the Yampa River basin, it receives heavy snowfalls throughout the year. In fact, it is the snowiest range in Colorado, getting over 500 inches of snow a year. There are no 14ers within the range, as Mount Zirkel is the highest point at 12,182 feet.

Sub-ranges include the Mosquito and Gore ranges, plus the Sierra Madres in Wyoming. The range can be crossed at its southern end by Rabbit Ears Pass (10,000 feet), US 40. It can also be traversed by Buffalo Pass, a gravel road connecting Steamboat Springs and Walden.

The mountain range covers parts of the Pike, Arapaho, Routt, Medicine Bow, and the White River National Forests. Steamboat Springs, a popular ski resort town, lies on the southwestern part of the range, at the base of Mount Werner. 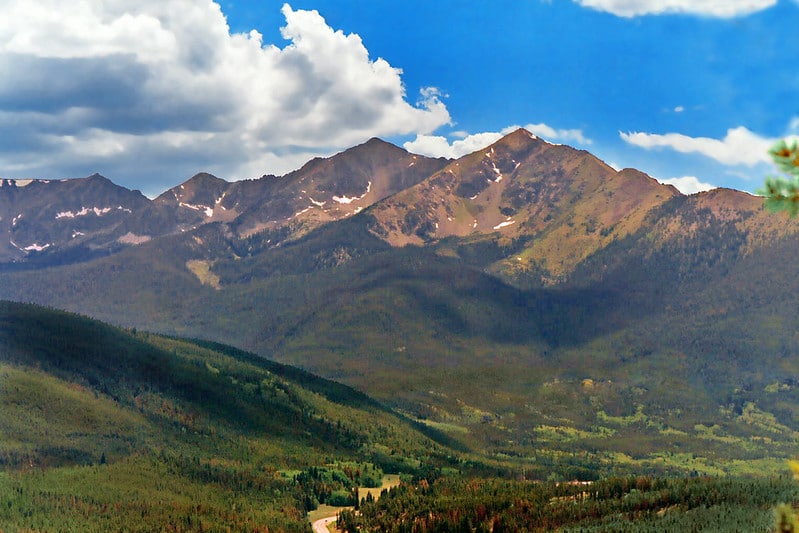 Views of the Ten Mile Range from across Lake Dillon. Photo by Steven Martin.

The Mosquito/Ten Mile range is a single range, with the south section of the Continental Divide called the Mosquito Range, and the north section is called the Ten Mile Range.

The Mosquito Range is located in central Colorado and it extends approximately 50 miles from Buena Vista in the south to Frisco in the north. It extends only 15 miles from west to east, from Leadville to Fairplay.

The Ten Mile Range begins at the town of Frisco in the north, to the neighboring town of Breckenridge. Within this small range, the first ten peaks are numbered Peak 1 through Peak 10 at the Breckenridge ski area.

This sub-set of the Rockies contains the towns of Breckenridge, Frisco, Fairplay, South Park, Leadville, and Buena Vista. This range is home to some of the state’s top ski resorts including Breckenridge, Keystone, Arapahoe, and Copper ski resorts. The White River National Forest, San Isabel, and Pike National Forests make up this range. 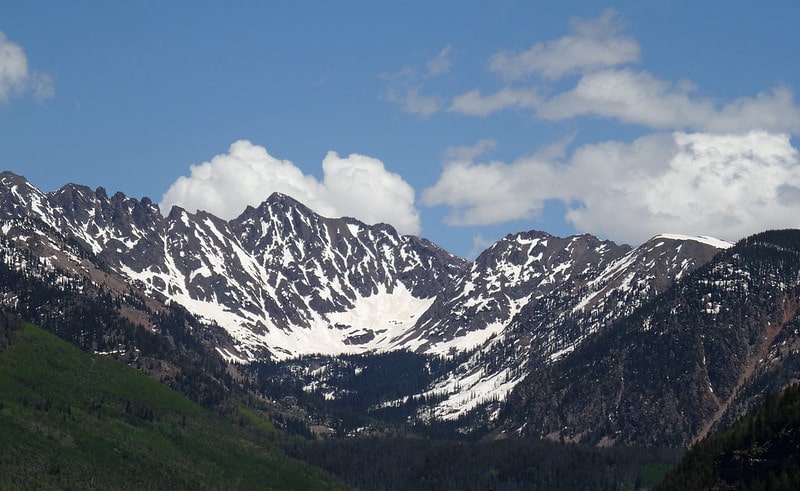 Views of the Gore Range near Vail. Photo by Jeffrey Beall.

The Gore Range is located in north-central Colorado ad extends roughly 60 miles northwest to southeast forming the southern part of the Park Range, from Rabbit Ears Pass to the Eagle River near Vail. The Colorado River runs through the range at Gore Canyon.

From a peak standpoint, the southern half of the range is the main draw for outdoor enthusiasts. With no summits in the northern half, its southern portion is where beautiful rocky ridges and jagged peaks can be found, although there is no 14er that claims a home here. Mount Powell is the highest summit in the range coming in at 13,586 feet.

State HWY 134 is the only major highway that crossed the range at Gore Pass at 9,524 feet. The range is traversed at its southern points by I-70 (Vail Pass at 10,662 feet) from Silverthorne to Vail. There is also Trough Road, a 24-mile scenic byway with both paved and unpaved sections.

Most of the range is found within the White River and Arapaho National Forests and large sections are protected by the Eagles Nest Wilderness. Town highlights include Frisco, Vail, Copper Mountain, and Silverthorne, where visitors will find the ski resorts of Copper Mountain and Vail Resorts.

Views of the Elk Range from atop of Quandary Peak. Photo by Mouser Williams.

The Elk Range is a high and formidable range that extends for roughly 30 miles south to north as well as west to east, within the central part of the state. Lying on the western side of the Continental Divide, the range rises almost 9,000 feet above the Roaring Fork Valley within the Gunnison National Forest.

The range is not easily traversed by car (or by foot) with a few backroad passes and trails, including Pearl Pass, Schofield Pass, and Taylor Pass, all of which feature a challenging 4×4 road to cross. State Highway 133 traverse McClure Pass at 8,770 feet and is the only paved pass but also one of the steepest.

While the range consists of many prominent peaks, it is best known for its access to nearby ski areas of Crested Butte and Aspen. Much of the range is located within the White River and Gunnison National Forest, as well as the Maroon Bells-Snowmass Wilderness and West Elk Wilderness.

But perhaps one of the range’s most iconic mountains and most photographed are the Maroon Bells. The two iconic peaks, Maroon Peak and North Maroon Peak both rise above 14,000 feet and are a popular starting point for the famous Four Pass Loop to Crested Butte.

Mount Princeton makes up part of the Collegiate Peaks in the Sawatch Range. Photo by David Herrera.

The Sawatch Range is found in central Colorado. It extends 80 miles near the Eagle River in Vail, down south to the town of Saguache in the San Luis Valley. The range forms a part of the Continental Divide and contains 15 of the state’s 54 14ers.

Its highest point is Mt Elbert at 14,433 feet and is the highest peak in the Rocky Mountains. Other notable peaks within the Sawatch Range include Mount Holy Cross (14,009 feet), La Plata Peak (14,360 feet), and the Collegiate Peaks near Buena Vista.

The range contains the towns of Minturn, Leadville, Salida, Buena Vista, Poncha Springs, and Saguache. It is home to the San Isabel and the White River National Forests. Twin Lakes and Turquoise Lake are popular recreation areas, along with activities along the Arkansas River. 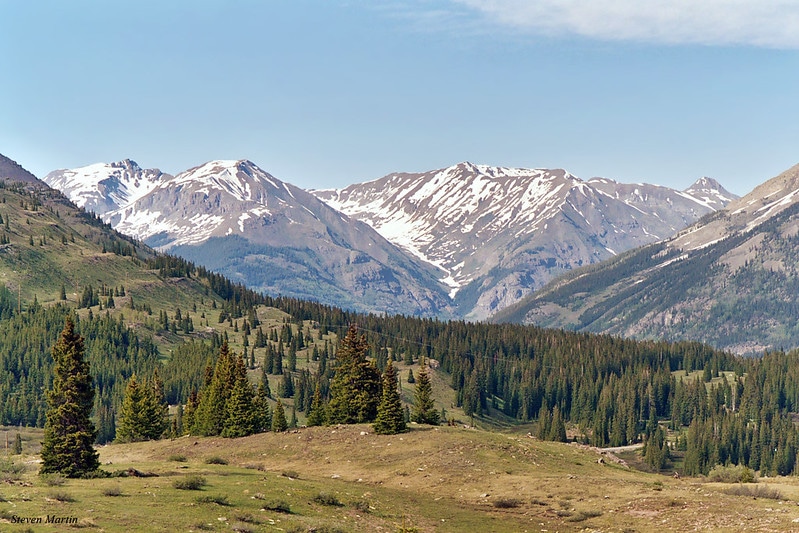 Views of the San Juan Mountains from Molas Pass. Photo by Steven Martin.

The San Juan Range makes up part of the southern Rockies. It runs southwest for roughly 150 miles from Ouray to the Rio Grande in New Mexico. Spanning, nearly 500,000 acres, the Sann Juans are the largest mountain range in Colorado.

Many of the peaks in the northern San Juans rise above 14,000 feet, including Mounts Eolus, Handies, Wetterhorn, Sneffels, Sunshine, Redcloud, and San Luis, with Uncompahgre Peak at 14,309 feet being the highest.

It is traversed by Wolf Creek Pass at 10,850 feet, Red Mountain Pass at 11,018 feet, and Molas Pass at 10,912 feet. There are many roads that cross the mountain range from east to west, but they all require a 4×4 vehicle and are mostly closed in the winter.

The range lies within the Uncompahgre, San Juan, and Rio Grande National Forests of Colorado. It contains the largest wilderness area in the state, the Weminuche Wilderness. Due to its rich history in the mining industry, a popular thing to see is the ghost towns and old mining camps that dot the range.

Telluride, which features the famous ski resort, and other small towns such as Ouray, Silverton, and Creede are all great places to visit. The range is also home to the beautiful Million Dollar Highway, HWY 550, between the towns of Silverton and Ouray. 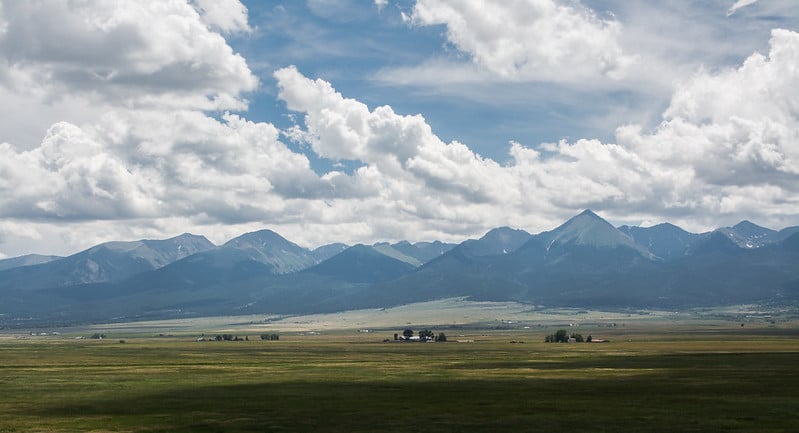 Views of the Sangre de Cristo Range from Westcliffe. Photo by Adam Meek.

The Sangre de Cristo (Spanish for the Blood of Christ) Mountains are the southernmost subrange of the Rocky Mountains, running about 250 miles from Poncha Pass near Salida to the mountains southeast of Sante Fe, New Mexico. They are typically thought of as an extension of the aforementioned Front Range.

The mountains were formed around 27 million years ago as they pushed up through the earth as one large mass of rock, with parts of it still uplifting today from active fault lines.

Its subranges include the Sangre de Cristo Range, the Crestones, and the Spanish Peaks. Just a few passes cross the range from east to west, two four-wheel-drive roads of Medano Pass and Hayden Pass.

But what makes these mountains even more impressive is the fact that they lack foothills, meaning the highest peaks rise swiftly from the valley floor from the east and west. Nearly over 7,000 feet in only a few miles in some areas.

The range is cradled by the San Isabel and Rio Grande National Forests and includes the Great Sand Dunes National Park. The range is home to the small towns of Alamosa, Crestone, and Villa Grove to its west and Westcliffe, Walsenburg, Cuchara, and La Veta to its east.

180 miles of trails make up the Sangre de Cristo Wilderness making for great hiking and backpacking. The area is also known for its rock climbing, particularly the challenging Crestone Needle.

The Rocky Mountains in Colorado are diverse and offer a little something for everyone! Happy Trails!